This is a review I did on Bloc Party's new album, Four, for Perdeby. It was published on 3 September 2012. 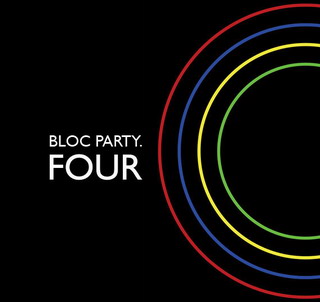 British post-punk indie rockers Bloc Party are back from their four-year hiatus after releasing their rather unimaginatively titled fourth studio album, Four. This time around, it seems as if the quartet has come full circle, with the tracks on the album sounding more like the guitar-driven splendour that made them famous on their debut album, Silent Alarm. Since Silent Alarm’s release in 2005, Bloc Party slowly started moving away from what gave them their distinct sound and started experimenting with electronic elements which culminated in their less-than-desirable third album, Intimacy.
But there is a twist in this resurrection tale. While Four relaunches Bloc Party’s signature sound, it also includes piercing, pulse-pounding metal influences that ooze off the faster tracks on the album.
“Three times three/ First cut first/ Pierce the skin/ It binds us,” whispers lead singer Kele Okereke menacingly on “3×3”, one of the more sinister tracks on the album. The song builds up with Okereke spurting out the chorus in a vocal style very similar to that of System Of A Down’s Serj Tankian.
“We Are Not Good People” is another one of Bloc Party’s heavier songs. A frenzied, aggressive guitar solo delivers an angry punch to the stomach, leaving you breathless but wanting, like a hard-headed teenage boy, to pick yourself up only to go back for more. The track showcases some of the band’s more lacklustre lyrics such as, “With these five lines you will be reborn/ A superman or maybe a jock/ You can crush the whole world in your hand/ If you wanna.” But, then again, Bloc Party has never been known for their profound lyrics, a flaw that has always been masked by the band’s impeccable guitar work and Okereke’s vocal ability. Then, as if you’re listening to a completely different band, Four surprises with a selection of slower, more mellow pop songs. With jagged guitar riffs interspersed with Okereke’s sharp falsetto and a jaw-dropping guitar solo, “Octopus” is a stand-out song on the album.
“Real Talk” transports you to Venice Beach à la Red Hot Chili Peppers with its groove influences and yet another one of Okereke’s chilling falsettos. These two contrasts in Four make the album seem a bit all over the place, as if it lacks some sort of cohesion.
Nevertheless, Bloc Party is back and they are making sure that everyone knows it. Four is an album that grabs you by the shoulders, shakes you violently and then kisses you softly on the cheek, as if to apologise for the slightly confusing listening experience it provided.
Bloc Party will be performing in Johannesburg at Mary Fitzgerald Square on 5 October at the launch of In The City Jo’burg, an annual event bringing international acts to the City of Gold. They will also be headlining Rocking The Daisies in Cape Town between 4 and 7 October.