Here's my review of the new Ashtray Electric EP, WTF. My only criticism, I think, is that it is too short. Published in Perdeby on 10 September 2012. 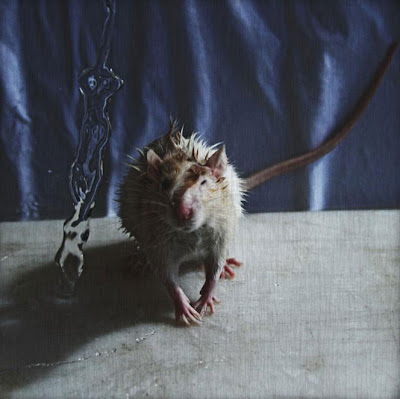 When SAMA-nominated indie rockers Ashtray Electric decided to release their EP, WTF, they followed a rather atypical route. To begin with, the band produced, recorded, engineered and mixed their fourth offering themselves. They then used the increasingly popular method of fan-sourcing to find a designer for the album cover, which features an ill-fated white rodent being drenched in water. Ashtray Electric also encouraged fans to sign up for the album, which they received in their inbox for free as a little digital gift when WTF was released. The result of these unconventional ways is a concise, tightly produced array of intimate tracks which form the B-side to their second full length album, Measured in Falls.
WTF opens with the mournful wail of the distorted guitar on “Lost”, the eerie first song on the album. “I feel lost in the joy / It’s too quick to enjoy,” sings lead singer Andre Pienaar woefully. This sad, otherworldly feeling created in the introduction culminates in what sounds like Pienaar’s voice exploding into an inescapable abyss.
The pace of the album quickens on “One”, a lively, head-bobbing, shoulder-grooving track complete with the sound of a sharp, cracking whip before the chorus. It makes way for “Looper”, the gem amongst the jewels that make up the treasure chest that is WTF. The song is like a piece of performance poetry, with Pienaar reciting the lyrics, thus allowing his natural stutter to take centre stage against a musical backdrop. It starts off with staccato-like drums that echo Pienaar’s erratic flow of speech which follows. The track is a brave, innovative and personal addition to the album.
“DJ” is a stripped-down, minimalistic song which showcases only Pienaar’s voice and the keyboard. With lyrics such as “Walked into the club tonight and I stopped and stared and I worked my way up to your thigh / You are my weakness”, this is the raw and sexy Ashtray Electric fans are familiar with.
The quick pounding of the drums on “Go” introduces the final track on the album. The song is like a predator on the hunt in a threatening jungle, with Pienaar’s vocals inciting the attack.
“I’m gonna go,” he repeatedly pants to build up the climax, a burst of sound which can leave Ashtray Electric licking their lips smugly, knowing that “Go”, like the rest of WTF, has tactically ensnared the listener.