I did a little Q&A with Veranda Panda for Perdeby's RAMfest spread. It turned out that they missed their set, which is incredibly unfortunate. I have been looking forward to seeing them live for the longest time. Holding thumbs that they will attempt another Gauteng gig soon.


The Black EP is a bit darker than your previous EP. What inspired this?
Liam: I think it all stems from the fact that Jane and I don’t make music that fits into any particular genre. When we started producing together we had all these tracks that went from hip-hop to drum and bass and were even more unpredictable in their mood. So we came up with an idea to release three EPs, grouping the tracks together as best [as] we could. The Black EP is really special to us, in that it’s way more personal than the others. Most of that music doesn’t belong on dance floors and comes from weird places in our heads. I think, if given the chance, most of [our] music would angle towards the dark side, especially Jane. Classical musicians are a bit weird.

Will your next release, Colours, follow the same style?
Jane: Colours falls into the dance floor orientated stuff. There is quite a bit of drum and bass and some heavy glitch bass numbers. The focus is mainly quite positive and uplifting, I guess. We have already started playing out some of the tracks in live gigs and the response has been awesome. Releasing it cannot come sooner.

You guys churn out music regularly. Do you find the song-writing process to be quite an easy one?
Liam: We are lucky! Our creative process is normally really painless once we have a solid idea. We have so much stuff backed up that it’s just a question of deciding what to work on and when. We also understand each other and our process is really quick once it gets going. That being said, I never want to see how many hours I wasted on bad ideas or songs that just ended up in the bin. As with most artists, we are really reactive to our moods and we do have really bad days, but luckily they are in the minority. Mostly we are really grateful to have such a talented team. Jessica Sole and Maxine Matthews are super professional and always exceed our expectations when we call them in.

It’s safe to say that there’s nothing quite like Veranda Panda in the local music scene. Were you worried about how your sound would be received by audiences who are not familiar with what you have created?
Liam: When I started making music as Veranda Panda, I somehow managed to skip the part where you have reservations about your sound. The music was completely awful. I still have some and cannot believe I confidently went out and assaulted people with that. There wasn’t much of an alternative electronic scene in Durban back then and I sort of just carried on in my spare time. [After] I met up with Jane in 2010, it sort of went from bedroom (and occasional gig) to clubs. Once we took that leap we began having reservations about our sound. People are obviously conditioned into the house orientated genres, especially in Durban, and I can name plenty of times where we have hated being on stage. We had some guy throw bottles at us, pull out our plugs and once a dude tried to jump over the booth to hit me for playing music he didn’t like. We laugh about it now, but it was pretty awful back then. Now and again I had serious reservations about pushing our sound, but we stuck with it and are really happy that we did! Jane has been particularly adamant about it, and I am really grateful for the amount of times she has persuaded me to play our tracks. Particularly we are really amazed how Durban nightlife has changed since mid-2010, and have to credit guys like George Kretsos for helping to challenge mindsets. 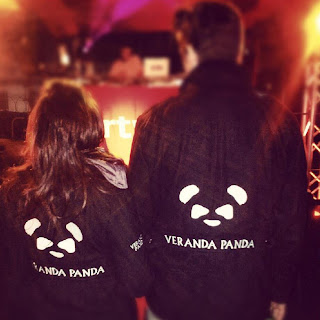 Your music boasts a number of collaborations. Do you think electronic music makes it a lot easier to experiment in this way?
Liam: Yeah definitely. We have two rules at the moment: 1) Don’t collaborate with drummers. 2) Don’t collaborate with bass players.
Jane: Other than that, we are so keen to work with all types of musicians. There really are no boundaries and the more creative the collaborations the better. It also helps to employ the skills of others, because if Liam had to sing on a track, nobody would like us ever again.

Does Veranda Panda have any plans to break into the international market?
Liam: We would love to break into the international market. At the moment we manage ourselves and have to admit that our knowledge on how to go about such a thing is limited. We are working hard to build our name in SA and have a good little following building up in France and Germany. We are confident that something will fall from the sky and send us to Europe.

You have revealed that Liam is determined to somehow work his harmonica skills into your set. Will we bear witness to this at your RAMfest set?
Liam: Jane laughs every time I play it. So I am still a bit insecure. But not this time around – the good old mouth organ has not truly found its place in the set yet.

What else can we expect from Veranda Panda in 2013?
Jane: Black and white bears, immaculately dressed, sitting on country verandas, drinking tea, trying to keep making music we like that makes people happy. And our next EP launch party in June.


Listen to some Veranda Panda below: