Here's the review I did of Beast's debut album, Smoke Swig Swear for Perdeby. Published on 18 February 2013. 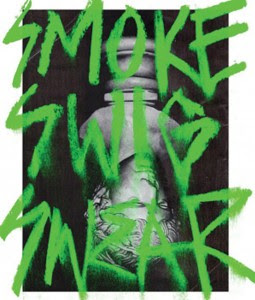 Taxi Violence drummer Louis Nel and guitarist Rian Zietsman wondered what a rock band would sound like if they ditched the electric guitar and had two basses instead. They plugged one of the basses into a guitar amp creating, rather ingeniously, a quick, formidable punch of grunge-laden rock ‘n’ roll.

They needed an indispensable backbone for their sound and so invited drummer Sasha Righini of The Plastics fame to join them. Knowing they wanted a female vocalist, Nel and Zietsman then approached Lark’s mesmeric siren, Inge Beckmann, to polish off their creation.

The result of this deliciously dark sonic experiment? The musically brazen creature that is Beast was unleashed.

Now, after teasing audiences around the country with their ferocious sound, they have finally released their free debut album, Smoke Swig Swear.

“And all the idols will topple over / And the fair maidens will be reformed / And all the men will know their worth when earth implodes,” intones Beckmann menacingly on “Hand of God”, an ill-omened foreboding about the wicked ways of mankind.

On “Fill The Hole”, we are introduced to a boisterous Beckmann who masterfully manipulates her usual operatic voice to scream and howl, to yelp and shout. The song also uncovers the hypnotic front woman’s impeccable songwriting skills in a series of chilling commands that are set against an aggressive force of guitars.

Title track of the album “Smoke Swig Swear” takes you on a contemplative stroll through town while “Walls” is a vertigo-inducing guitar frenzy that speaks of a self-consuming desire for freedom as Beckmann incites, “Kick down the door. Make space for more and rise.”

Make no mistake in thinking that you will find sweet songs that encourage a forest of swaying lighters on Smoke Swig Swear. It’s all about frenetic slabs of raw, unadulterated music that grabs you by the shoulders and shakes you savagely before delivering a stinging slap across the face and heading for the door.

Beast is the sound of brooding in a bar that smells of stale cigarettes and beer-infused sweat, the sound of waking up in a bizarre place the next day, and the sound of no regret.

It’s hot and it’s dirty, and best of all, it’s a command to let loose and indulge in some guiltless abandon.