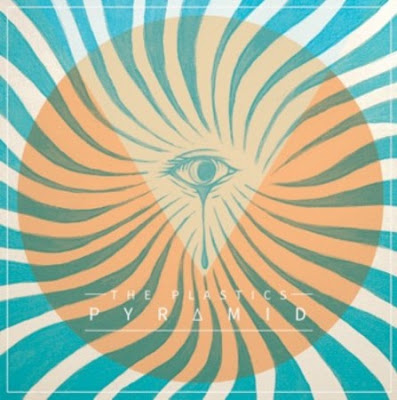 “I’ll guess you’re a king for a day if you can take me back to nineteen sixty eight,” announces lead singer Pascal Righini on “Stereo Kids”, The Plastics’ highly contagious single that’s been doing the rounds for over a year now. A fairy godfather in the form of John Lennon isn’t going to cure The Plastics’ longing for a bygone era, so they’re doing the job themselves with Pyramid, their second full-length offering of retro rock and roll.
On Pyramid, the kooky quartet up the psychedelic ante, thanks to their new-found interest in experimenting with effects pedals. The best example of this is on “Mud and Money”, the impressive 10-minute spectacular that’s almost like a paean to The Beatles as it winds through different moods. They may not be doing the psychedelic thing throughout the album, but when they do it, especially on “Mud and Money”, The Plastics go all out.
There’s the trippy, filthy fuzz of the electric guitar and different effects that one minute sound like an alien landing is taking place and the next, like a ballerina sweetly prancing on the moon. And then there are the surreal, seemingly disjointed lyrics (“Plasticine scheme team cooked up on roofis that make orange people see into the hearts and the minds and the dreams in your bed”) which do a good job of reminding you of The Beatles’ “I Am the Walrus”. Lennon composed the song by combining three songs that he had been working on, which is rather fitting as The Plastics also combined what they had come up with after numerous lengthy jam sessions to form “Mud and Money”.
“Rat”, easily the heaviest song on the album, has a slightly dark tone with Pascal’s drawn out vocals and menacing lyrics. It brings to mind Oasis, with its gargantuan stadium rock sound and fiery acid guitar solos.
The psychedelic-infused tracks aside, Pyramid offers more of what The Plastics are also good at: melodious pop rock tunes that make it okay to whip out your freakish dance moves in public.
“Out of This Town” is a song about inevitable change and the yearning to escape, and has hints of the glockenspiel, while “Sooner Than Later” speaks of anguish thanks to a girlfriend that’s now a girl fiend. There’s also “Best Pretenders”, which is currently sailing the airwaves smoothly with it’s simple but altogether charming chorus of “I’m 45 minutes too late/ I’m 45 minutes too early”.
Still sounding like themselves, The Plastics have taken a step forward in the way of experimentation but thankfully, it’s not a whopping leap that will leave fans behind in a state of perplexed turmoil. In fact, it might even earn them some new ones.

Posted by Melina Meletakos at 21:17