Remember Bombay Show Pig (I previously raved about them here)? Well, today the lovely Dutch duo released their music video for 'Timewaster', and it features footage from their tour to South Africa.

I've also included the interview I did with Linda and Mathius at Oppikoppi for Perdeby. 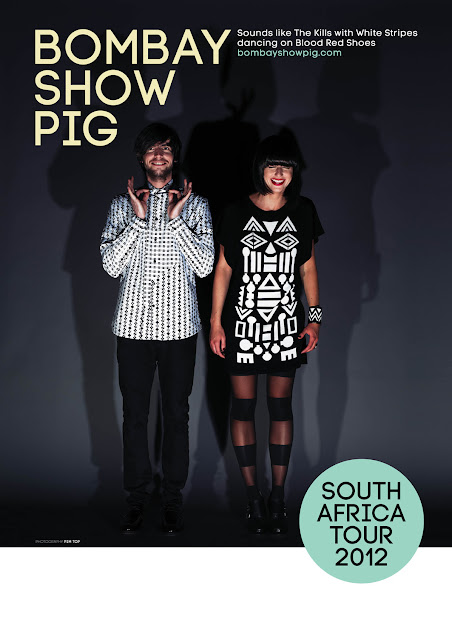 You guys have played a couple of shows now in South Africa. What has the tour been like so far?
Linda: Awesome. For me it’s the first time in South Africa. [Mathias] has actually been here before – [he has] also played Oppikoppi with another band. So I think it’s kind of a different experience for each of us and also a new one because it’s different for you (Mathias) now, right?
Mathias: Yeah, yeah, we’re depending on people here a little more. Our budget is, like, really small so we have to ask everybody to help us out and so this way we meet a lot of people over here. It’s like a very personal view of South Africa. So that’s a lot different to the last time I was here. But that’s really good and I like this way a lot better than the other way.
Linda: And Oppikoppi is already a great dessert. We haven’t even played yet and I think it’s going to be awesome, the vibes going to be amazing.

How has the response been to your music over the tour?
Linda: Awesome. We sold so many CDs [that] we have no more CDs left so we had some extra flown in. We’ve been at 5FM and all kinds of radio stations and, yeah, they’re playing our music. So for us it’s been very successful. Even now when we’re walking [through] the festival we’re getting, “Woo! Bombay Show Pig!” and we’re here for the first time so this is insane, it’s awesome.

How does performing in South Africa compare to performing back home in the Netherlands?
Mathias: All the venues here are like a bar first and then a music venue second. Back home you have a lot of music venues, so people come out because they want to see you and over here you still have an element of surprise because people are going there to drink and if the band is nice they’ll stick around. If not, they’ll go away again. It’s a bit more harsh than back home. It keeps you on your toes.

How do you think changing from a trio to a duo has changed your music?
Mathias: I think our music is really pure. We have a lot more energy as a duo than when there were three of us. It feels more focused in a way when you’re playing as a duo.
Linda: And it’s really handy that you just have to call or text one person to get where you’re going.
Mathias: We toured South Africa in a really small car and we fit everything in.

What surprised you about your visit to South Africa?
Linda: How cold it can get at night. [Laughs] Back home it’s summer right now and here it’s winter, so I was like, “Oh, I’m packing all my short skirts,” and then I was like, “Ah!” But today was nice. But musically we saw a few cool bands we played with and we’re still listening to this CD of this guy we met in Johannesburg.
Mathias: I’ve never been to Cape Town before. So last time I was around Joburg and Pretoria. But this time we went to Cape Town and that’s like a whole different world. So now my whole vision of South Africa has been flipped around again. I liked it before but now I see how diverse it is.

We heard you were making a music video from footage of your South African tour.
Linda: Yeah, actually one of our songs is going to be released when we get back and we’re also going to [release] it here for the radio stations. So we thought it would be fun if we could use all of the gig footage and also this footage (footage of interviews and backstage). Yeah, we’re going to make a video out of it. It’s a cheap and fast way but also like a goodbye.

Posted by Melina Meletakos at 11:13