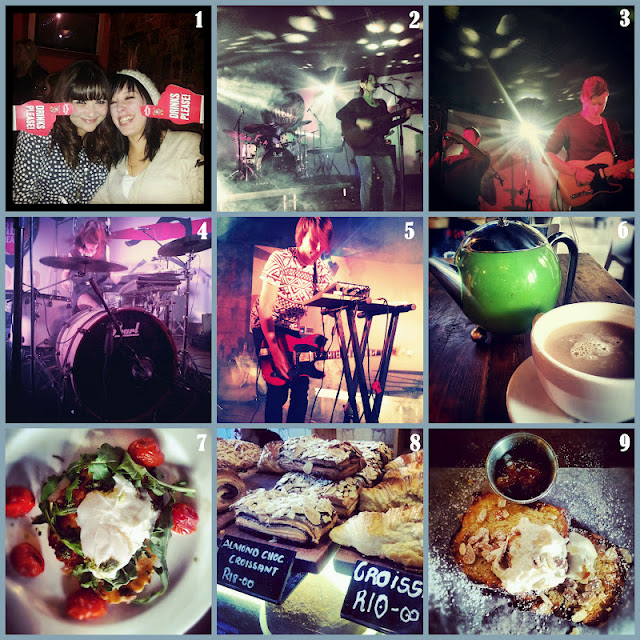 1. Once a month the Perdeby staff congregate at Aandklas to see just how far we can stretch our lovely little bar tab. It is here that I am often reminded that I write for a newspaper that is in fact a haven for psychotic, borderline alcoholics. Bless. How we manage to bring out a decent newspaper every week is beyond me though.

2. On Saturday night I made my way to Arcade Empire, which was teeming with loud, hair-flipping, prematurely drunk kids. The lovely Laurie Levine kicked things off with Peter Auret on the drums. They deserved a better crowd but you can't expect kids, who were later slurping up Kinky Robot like a celebratory ice-cream after a good report, to appreciate good music. Sigh.

3. December Streets. The reason all the young ones stayed out way after their bedtime. The band were launching their new album, This Is. I won't say too much about it because I am reviewing the album for an upcoming edition of Perdeby but wow, lead guitarist Nico van Loggerenberg's mad guitar skills blew me away.

4 & 5. Lisa van Leeuwen and Mathius Janmaat from Bombay Show Pig, an indie rock outfit from the Netherlands. The reason I joined the playground party on Saturday. I'll be doing a post on them tomorrow but just know that if you are making your way to the festival on the hill next week it would be quite a smart move to go see Bombay Show Pig perform. You won't regret it.

6. It's become somewhat of a tradition for my mom, Christi and I to go for breakfast on a Sunday morning. This week it was Vovo Telo in Woodlands.

7. I had the corn hotcakes with a poached egg, rocket, basil pesto and roasted rosa tomatoes. Delicious.

9. My mumsie had the toasted brioche with fig jam, roasted almonds and marscapone cheese. I snuck a bite and my taste buds did a little jig of joy.

Hope you all had a good one too!
Posted by Melina Meletakos at 22:22